The Masai Mara is a National Reserve of primarily open grassland situated southwest of Kenya. It lies in the Great Rift valley, a fault line which stretches from the Red Sea in Ethiopia to Kenya for about 5,600km or 3,500 miles. The Reserve is a vast protected landscape with abundant wildlife, endless plains and breath-taking vistas covering some 1,510 square kilometres. It is the flagship conservation area of Kenya and shares fenceless borders with several neighbouring private conservancies, including the world famous Serengeti National Park in Tanzania.

Well known as Kenyaís jewel of wildlife viewing areas, the Masai Mara is one of the most sought after tourism destinations in Africa, particularly during July to November when the annual migration of over 1.5 million wildebeest takes place. Game viewing is excellent any time of the year, with the most wildlife tending to be concentrated on the western escarpment.

The Masai Mara National Reserve has recorded some 95 species of mammals, reptiles and amphibians and more than 400 species of birds. With this abundant and diverse resident wildlife population, it is no wonder that visitors seldom miss seeing the Big Five (elephant, buffalo, lion, rhino and leopard). Other popular animals include giraffe, zebra, eland, gazelle and hyena. The big cats in Masai Mara have often been shown in popular wildlife television series all over the world.

One of the greatest spectacles of the world takes place each year from July to November when a staggering amount of wild animals arrive in the Masai Mara area, heralding the famous wildebeest migration. A dramatic and spectacular mass movement takes place when more than 2 million wildebeest, gazelle and zebra take part in an annual seasonal cycle, driven by the need for water. In a frenzy to reach fresh grazing to regain their strength, the wildebeest face dramatic river crossings infested with enormous hungry crocodiles and cover thousands of miles of open grassland where lions and leopards feast on any stray or lagging animal. 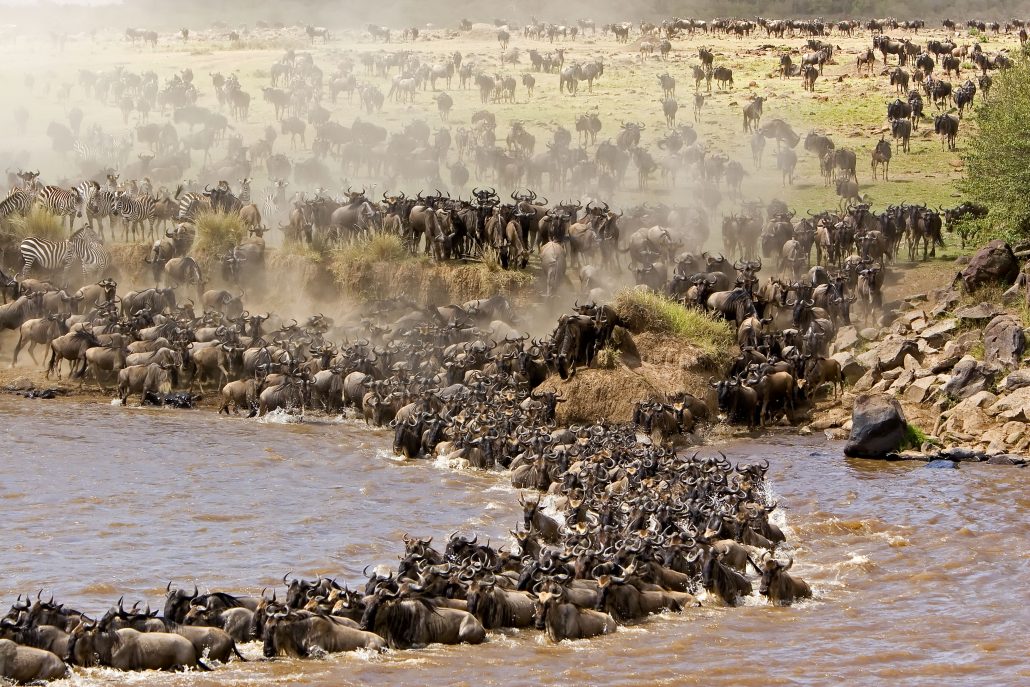 The last leg of the migration is triggered by the short summer rainfall in November when the wildebeest migrate south towards their calving grounds in the Serengeti. The calving season in the Masai Mara happens at the same time, during December to January. This is known as the ìgreen seasonî when there is an abundance of surface water and the wildebeest, antelope and zebra birth their calves, fawns and foals. This is also the time when predators give birth to their cubs and pups as there is plenty of prey around, presenting wonderful opportunities for wildlife photography.

The Masai Mara consists of an ever-changing landscape of endless grasslands of oat grass which gradually changes from green to ripe golden waves, gently parted when herds of visiting wild animals move among it. A seamless union is formed by Kenyaís Greater Mara ecosystem, Tanzaniaís Serengeti National Park and the Serengeti-Mara ecosystem thanks to the lack of fences. The sheer distances means that visitors can wake up in the morning to a herd of over 500 elephant slowly making their way across the Ol Punyata swamp in the middle of the triangle, only to find that they have vanished the next day.

A rainfall of 1,55mm per year, a large swamp, several fresh water streams, the meandering Mara River and the salt lick means that there is enough water and food for the wildlife even during the driest months. Three African mammalian species in triangle face the threat of extinction: elephants, lions and black rhinoceros.

The Masai Mara offers a range of tourist accommodation from romantic to child-friendly. When the Reserve becomes too crowded during the high season, there is plenty of accommodation available in one of the neighboring private conservancies with easy access to the Mara. The Mara offers superb migration and game-viewing scenes as well as retreats to crowd-free settings in the conservancy where you can partake in game viewing by day or night, or guided nature walks.
Hot-air balloon flights come highly recommended as well as an opportunity to experience cultural interaction with authentic Maasai people in the area. Also popular is combining a Masai Mara safari with one of the other top destinations in Kenya such as the Amboseli National Park or an island break to the glorious, sun-drenched beaches of the Seychelles.

Access
Two all-weather airstrips service the Masai Mara Triangle:
The Mara Serena
The Kichwa Tembo.
Main road access to the Triangle is through two gates: the Narok and the Sekenani.
Accommodation
There are only two lodges situated in the Mara Triangle:
– Mara Serena (150 beds)
– Little Governors Camp (36 beds)
Situated on the periphery with access to the Triangle are:

The best time to visit is peak season between July and November when the migration takes place. From November to February also offers excellent wildlife viewing.